You are here: Home / Food / Recipes / Make Delicious Donuts for Father’s Day and celebrate like you’re in Italy
Jump to Recipe Print Recipe

Struggling with ideas on how to celebrate Father’s Day this year?

What about adding a bit of Italy into the day by making homemade donuts?

I love Father’s Day in Italy, but not only for celebrating fathers. Here in central Italy deep fried rice pudding donuts are the traditional Father’s Day treat. 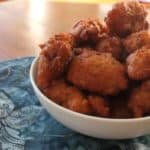 And they are the best.

Father’s day in Italy is a little different from the one in England or North America.

First, Father’s Day is celebrated at the beginning of spring, on March 19th; not a Sunday in June. This is because father’s day is on a Saint’s day; San Giuseppe.

San Giuseppe in English is Saint Joseph, famous for being Jesus’ father. Which makes sense.

And of course, Italians celebrate with a treat on his Saint’s day.

Here in Umbria, it’s a special donut made with rice. And one of my favorite Italian desserts that only gets made once a year.

These ‘donuts’ are called Frittelle di Riso, or fried rice.

They are made with thick rice pudding and then shaped with two spoons and deep frying them.

I’ve also heard of people baking them, which I might try next year; the smell of deep frying isn’t my fav, and it should be much faster.

If you’re in central Italy in mid-March look for them in pastry shops, grocery stores, or a to indulge in these local treats.

But be quick and buy some di in the morning so as not to risk disappointment, they sell out fast.

If you aren’t in Italy then make them at home on the official father’s day of Italy or the one your family celebrates.

¾ of a liter of milk

The zest of a lemon

Cook the rice in the milk with the salt and lemon zest.

It will take around 15-20 minutes once it has reached a boil.

The important thing is that the rice is cooked.

If the milk has been completely absorbed start add water, keeping in mind that a bit drier is easier to form so add as little as possible.

Once cooked remove from the pan and let it cool down.

Beat the eggs with the sugar, rum, baking powder, and cinnamon.

Once the rice mixture has cooled down add the egg mixture and stir in. If you would like to add raisins you could do this as well now.

Depending on how liquid it is, add flour to thicken.

Be careful! I went for something with higher sides to help protect from splashes.

Use 2 spoons to form quenelle for one donut. Each donut takes about 3-4 minutes to cook flipping it halfway through. Don’t try to cook lots at once, I had no more than 4 at one time.

They are best when eaten on the same day, so make sure you have people to share them with.

An easier cake to make from Perugia is the Ciaramicola. It’s red and white, the colours of Perugia, and eaten for Easter.

Share
Tweet
Pin105
105Shares
« The Complete Guide to Enjoying the Wine of Umbria
Amazing Wild Asparagus, the Best of April in Umbria »

This site uses Akismet to reduce spam. Learn how your comment data is processed.